The COVID-19 pandemic boosted the expansion and development of new remote models of care and clinical research modalities.

The COVID-19 pandemic boosted the expansion and development of new remote models of care and clinical research modalities. Health systems are going to implement telemedical innovations in the near future. Virtual clinical trials (VCT), also known as remote or decentralized ones, may profoundly change the way how clinical studies are conducted, for the benefit of patients with chronic and neurological diseases who are often fragile and may have limited access to traditional healthcare facilities. Despite significant progress, several limitations still need to be addressed to implement telemedicine technologies for VCT. The information and communication technology (ICT) devices (e.g., mobile apps and wearables) may be applied to VCTs but show some practical issues that may hamper the compliance with rigorous research criteria and protocols. We herewith discuss the advantages and disadvantages of virtual reality (VR) in combination with other ICT devices and solutions to improve the conduction of VCT in patients with neurological disorders.

The so-called “digital divide,” that is, the gap between people who can and those who cannot access high-speed and broadband internet connections, and issues related to VR, such as VR sickness, should be addressed to improve larger VCT participation to neurological patients.

THE CONTEXT OF VIRTUAL CLINICAL TRIALS

The wide availability of information and communication technology (ICT) devices, such as portable laptops, smartphones, mobile apps, and wearables, is offering previously unavailable opportunities for monitoring the outcome of therapeutic interventions. ICT devices may be effective options to support healthcare interventions during the present COVID-19 pandemic, and presumably in the future, for temporally limited lockdowns, as well as for patients with reduced access to healthcare facilities.

Neurological patients may experience difficulties in accessing healthcare facilities because of motor impairment or show specific problems, for example, Parkinson’s disease (PD) motor fluctuations that can be better assessed in an ecological than a hospital/outpatient setting.

The application of ICT solutions to remote and/or home-based interventions for research purposes plays a key role in telemedicine. Virtual clinical trials (VCTs), that is, clinical trials performed remotely, including the interaction between experimenter and participant, and the assessment of outcomes, are still at an early stage of development. VCTs may offer several advantages, such as having the participant embedded in her/his home context, collecting real-world data, reducing costs and time, increasing recruitment rates and adherence, and relying upon commonly available ICT devices.

To avoid potential variability factors, VCTs require rigorous protocols, including accurate and clear information and instructions, control of variables and parameters, adherence to the intervention, and quality of data. These are critical VCT limitations compared with traditional randomized clinical trials (RCT), where the procedures, interaction with the patient, interventions, data generation, and collection can be more easily performed in the hospital/outpatient settings.

We envisage that the home context of the participant is the most critical point that may represent a source of bias in VCTs. We herein propose that this methodological issue could be limited by virtual reality (VR), which, in this specific case, should be considered as an approach rather than a mere technology and may contribute to accuracy and quality of VCTs.

VR is a software-based technology that allows the delivery of afferent information to a subject with a high level of sensorial and perceptual involvement, that is, through an immersive experience. In the meantime, VR provides interaction with the immersive simulation thanks to the subject’s movement of head, limbs, and hands through a head-mounted device (HMD) and hand controllers. VR simulation may therefore offer the opportunity for higher levels of involvement and interaction and, in the meantime, may allow for controlled setting of parameters and variables. Considering that VR has been extensively used in the context of neurological disorders, we suggest that Virtual Reality Clinical Trials (VRCTs), that is, the embedding of VR in VCT, could efficiently improve VCT by retaining its advantages and limiting the potential bias due to high context variability. 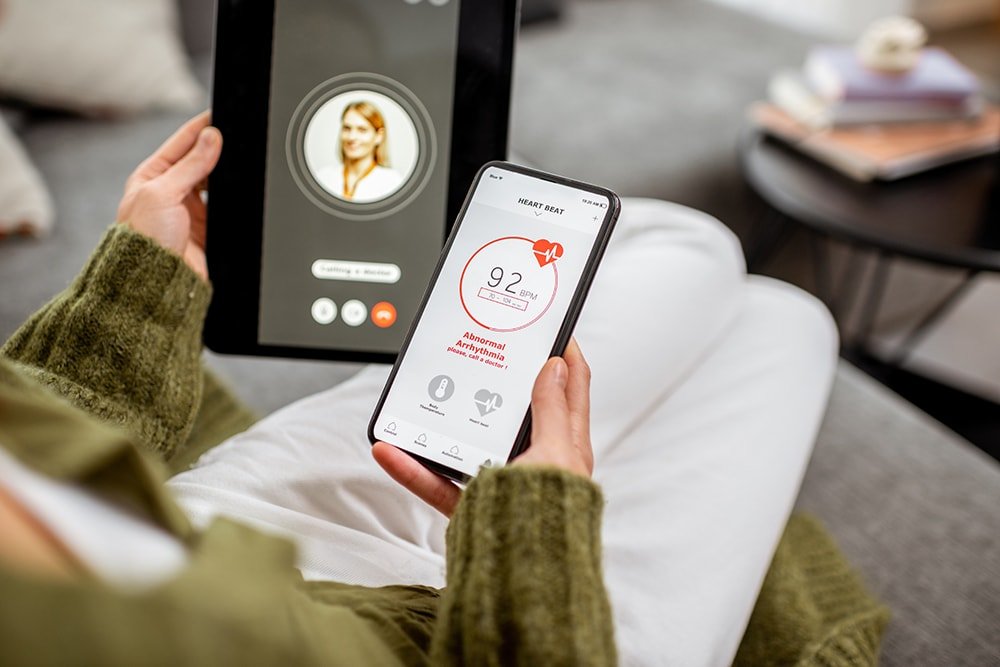 VRCT is a patient-centered home-based approach that may offer controlled stimuli delivery, appropriate context, and collection of data compared with non-immersive web or mobile apps. There is a huge availability of ICT devices for the remote management of VCT instructions, interventions, monitoring of compliance, and endpoints collection. However, these ICTs are based on a two-dimensional format of information, either visual or acoustic through phones, computer speakers, or screens. VR, thanks to increased immersion and involvement closer to a naturalistic condition, offers the unique opportunity for an enhanced spatiotemporal interaction between input sources (e.g., instructions, stimulations, etc.) and outcomes (i.e., participant’s action/movement, task performance, and oral/written feedback).

The VRCT approach may offer extensive advantages. First, it will provide better interaction with experimenters for instructions/training on trial procedures and for the assessment of participant’s learning feedback and engagement. Second, it guarantees a more controlled application of independent variables, and accurate collection of dependent variable data, with an overall improvement of participant’s acceptability, adherence, and compliance. Other advantages are reduced costs, possibility to recruit wider samples, to monitor individual context conditions, and to include other ICT approaches. For instance, augmented reality or mobile apps could be used for specific aims to support VR, although the degree of immersion and involvement achieved with VR is not available with other technologies.

The main VRCT limitation is the lack of VR standardization for clinical purposes. However, VR could be easily programmed for controlled parameters of appearance and functioning, standard conditions for input delivery (either training instructions or intervention stimulation) and outcome acquisition (either learned procedural task or outcome measures/performance) limiting between-subjects variability, and hopefully improving participant’s quality of the immersive experience and compliance. Feasibility studies are recommended for the definition of optimal apparatus standardization (e.g., display resolution, motion delay, session duration, HMD wearability, etc.) for better reproducibility and tolerability. Another limitation is the potentially low tolerability to VR sickness for some participants that may hamper its application to some populations, for example, elderly people, who are the main population for some neurological disorders (e.g., Alzheimer’s disease and PD other neurodegenerative disorders). This is an important drawback that needs to be improved with optimized VR technology.

VR may offer a naturalistic and, in the meantime, controlled experimental context, but may not completely reflect the actual real-life behavior of participant. Therefore, VR could better perform for cognitive tests, and limb motor tasks, than for recording activities of daily living.

Finally, the limitations to the access of high-speed and broadband internet connections may contribute to the digital divide, not allowing participation to VRCTs to some population of patients.

POTENTIAL USE OF VIRTUAL REMOTE CLINICAL TRIAL APPROACH IN NEUROLOGY

VRCT may be applied to neurological conditions and neurorehabilitation to measure motor and cognitive performance, pain, and quality of life controlling for emotional/affective changes. Applications to quarantined participants, people with different forms of movement restrictions, and/or affected by neurological conditions may represent a specific relevant field for VRCTs.

The core principles, pros, and cons of virtual remote clinical trials and their application in neurology

VR provides the advantage to perform motor tasks at gradually increasing, measurable intensity, with multimodal feedback to explore how the activity is performed. A multicenter RCT demonstrated the feasibility of remote, virtual training to PD patients through VR, and a videoconference system. Mixed systems are therefore envisaged for virtual and augmented reality, that is, a technology that consists in a combination of real and virtual objects in a physical environment through the smartphone camera or special glasses that could improve perception of space, obstacles, and therefore of performance in terms of coordination and balance.

Recent evidence suggests that cognitive outcomes can be explored by specific VR protocols in a more ecological way than classical paper and pencil tests, despite their acceptance require further studies.

VR has been widely used for the treatment of acute and chronic pain, but it may also be applied to assess pain and other subjective measures, such as pain-related quality of life, in a daily life environment in future VRCTs.

VR has led to considerable results thanks to the opportunity of combining therapeutic training with acquisition and maintenance of motor skills. Visual, auditory, and proprioceptive multisensory feedback can facilitate learning, consolidation, and recall of motor information. The potential for sensory, cognitive, and emotional involvement implies a higher level of learning, and may result in a more active engagement and an increased awareness of cognitive and motor outcomes. The possibility to recreate an environment in a pertinent and congruent context may increase the likelihood of generalization of the results to other contexts.

The cost for VR technology is affordable, and an equipment could be assigned to the participant at home for the limited time period of the VRCT. The specific VR simulation will be used for all the participants, resulting in a lower cost per participant for the software development. VR is nowadays user-friendly as shown by the widespread use as home entertainment. The interaction of the participant with the immersive scenario could be video recorded during the simulation session. Instructions or interventional tasks could be standardized and provided directly into the VR simulation environment and taught through extended reality (XR). XR offers the possibility of interacting with the investigators, represented by avatars, and/or physical elements in the patient’s extrapersonal space. The presence of an operator will increase the participant’s sense of engagement in VRCT training modules. The XR option could include more than one avatar, similarly to online role-playing games, but it would not be recommended in VRCT unless interaction with other participants is necessary. XR could also integrate the videoconferencing system to improve the investigator–participant interaction.

Beside technological limitations of VRCT, there could also be methodological and ethical issues that must be carefully anticipated in the protocol design and trial planning when dealing with post-session adverse events, safety of instrument use, privacy, blinding, inappropriate out of trial VR use, potential data acquisition, and transmission issues. A critical pros/cons appraisal, which considers the potential issues of VR, is required at an early stage of VRCT protocol design, and the inclusion of non-VR ICT devices already available and validated (e.g., smartphone and wearables) for feasibility, acceptability, and compliance.

VRCT may offer a great and timely opportunity to implement current VCT protocols. VR could be integrated with other ICTs and traditional procedures that cannot be performed remotely. Blended protocols could be designed where screening, recruitment, drug delivery/dosing, and follow-up visit are performed like in classical RCTs, whereas dependent variable assessment and data collection are done in VRCT mode. Where the trial is aimed to explore the effects of a non-pharmacological intervention, the independent variable might be applied during the VR simulation, for instance, by presenting different stimuli levels or task difficulties. Of course, control conditions should be included in the protocol design to contrast for VR immersion effect.

These methodological adaptations should be associated to technological ones to improve trial feasibility, for instance, in the development of user-friendly VR tools, easy to acquire instrument use and troubleshooting, 24/7 communication with trial personnel, and computer helpdesk. The association of adapted protocol design and technology accessibility is a priority for future VRCTs to guarantee a rigorous methodology under strict ethical rules. Our recommendation is that VRCT should be at first confirmed by a series of feasibility studies in laboratory settings and pilot studies in selected populations.

PrevPreviousMexico to conduct trials of China and France Vaccines.
NextTests on mixed COVID-19 vaccines may start in a few weeks.Next